Cookies help us deliver our services. By using our services, you agree to our use of cookies. More information

From Harry Potter Wiki
Jump to navigation Jump to search 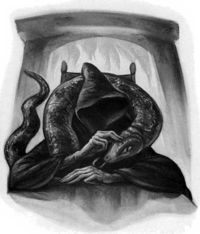 Infamous Parselmouth Lord Voldemort communicating with his snake, Nagini, coiled around him.

Parseltongue is the language of serpents (as well as other magical serpent-based creatures, like the Runespoor) and those who can converse with them. An individual who can speak Parseltongue is known as a Parselmouth. It is a very uncommon skill, and is typically hereditary. Nearly all known Parselmouths are descended from Salazar Slytherin with Harry Potter being a notable exception.[1]

Parseltongue is, when spoken, a hissing sound, similar to that of a snake; as such, normal people cannot understand it. Aside from serpent-based creatures, Parselmouths can communicate with each other with the language, as Harry understood Tom Riddle's commands to the Serpent of Slytherin, and the House of Gaunt communicate with each other almost exclusively in Parseltongue. While inherited, Parseltongue usually requires the speaker to face a snake-based creature or object shaped like a snake (e.g. a carving); more proficient speakers may be able to speak it at will, as the Gaunt family was very proficient in the language - enough so for Morfin to speak to Bob Ogden with it, while Voldemort could speak to the Statue of Slytherin to release the basilisk.

The ability to actually speak Parseltongue — not just imitate it as Ron Weasley did — is considered an attribute of a Dark Wizard, which is partly due to the fact that both Salazar Slytherin and Lord Voldemort possessed this ability. Another notable Dark Wizard who was also a Parselmouth was Herpo the Foul. However, as Albus Dumbledore pointed out, there are Parselmouths among the good as well, the most well-known of which was Harry Potter. Paracelsus a notable alchemist and a "medical genius" is credited with the discovery of Parseltongue in the sixteenth century, despite the existence of speakers like Herpo the Foul or Salazar Slytherin in the classical and medieval ages.

An unknown member of the Dark Force Defence League once stated when asked regarding the matter by Rita Skeeter - "Personally, I would be highly suspicious of anybody who could converse with snakes, as serpents are often used in the worst kinds of Dark Magic, and are historically associated with evildoers."

Harry Potter as a Parselmouth[edit]

Lord Voldemort passed the ability to speak and understand Parseltongue on to Harry Potter when he attacked him in infancy in 1981, inadvertently and unknowingly making him into a Horcrux. Harry first experienced conversation with snakes at age ten when he was taken to the zoo with his cousin Dudley Dursley and found himself communicating with a snake while in the reptile exhibit. Harry inadvertently caused the glass of the snake's tank to vanish, enabling it to escape. When the glass returned, he trapped his cousin Dudley inside the tank whilst laughing at him, and not knowing what to do about it.

Harry was not consciously aware of his ability to speak Parseltongue until 1992; he was pitted against Draco Malfoy in the Duelling Club and was able to communicate with the snake Draco conjured to attack him, telling it not to attack Justin Finch-Fletchley. This caused hysteria among his fellow students because graffiti on the walls of Hogwarts Castle foretold that the Heir of Slytherin would open the Chamber of Secrets, unleashing a monster that would attack the school's Muggle-born students. The Heir of Slytherin was in fact Voldemort, but Harry was able to gain access to the Chamber by speaking the password in Parseltongue, and subsequently killed the basilisk within. It was shortly after this incident that Harry learned how he acquired the ability.

Harry also used his skill in Parseltongue to open Salazar Slytherin's Locket. When Harry, Ron Weasley, and Hermione Granger returned to Hogwarts to search for Voldemort's final Horcrux, Ron managed a weak imitation of Parseltongue to re-open the Chamber of Secrets so that he and Hermione could fetch basilisk fangs, which Hermione used to destroy Helga Hufflepuff's Cup.

After Lord Voldemort destroyed the fragment of his soul residing in Harry, Harry lost the ability to speak Parseltongue, about which he was glad and relieved.[2]

J. K. Rowling has stated that she took the name Parselmouth from an "old word for someone who has a problem with the mouth, like a hare lip".[3]